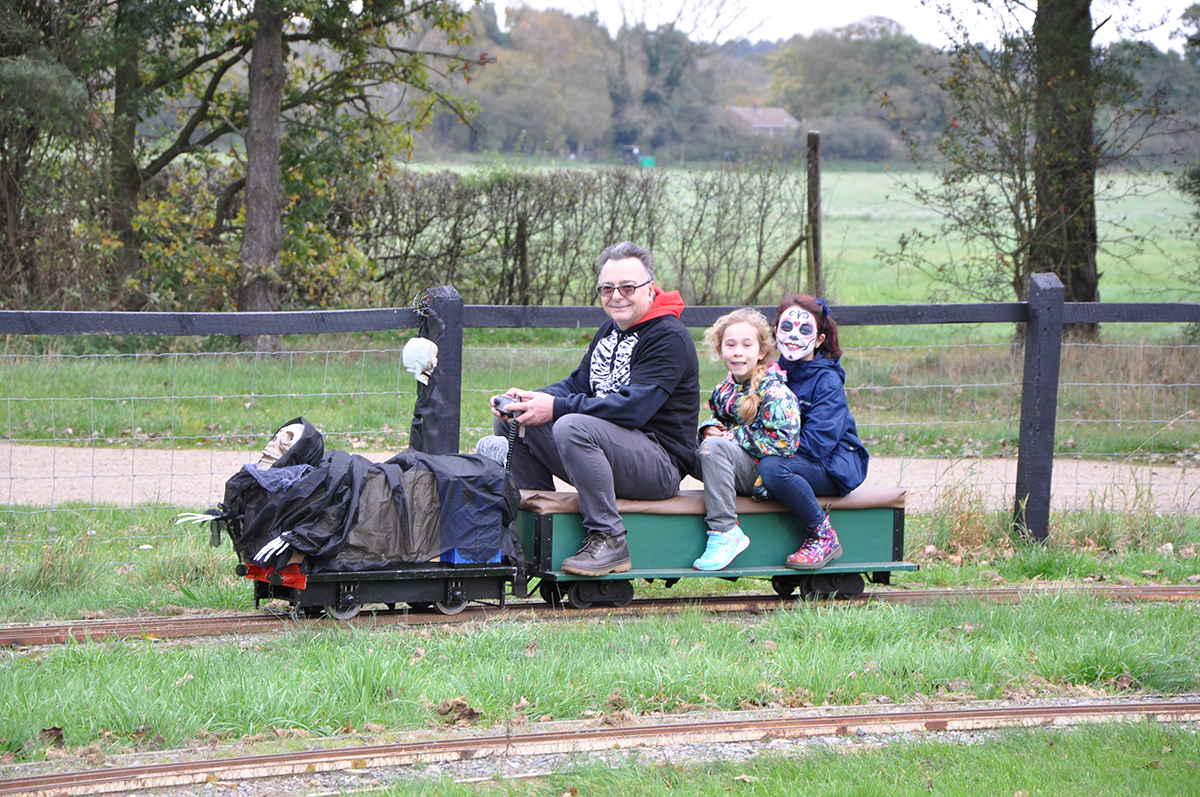 A desire to have a go at playing trains and traction engines in the dark prompted this event to take place. With the track now in good fettle it is getting more and more use, so a run at night had been on the cards for a while.

We were lucky with the weather as it was a dry and relatively mild evening that saw many members turn up with or without toys. Some were suitably dressed in Halloween costumes. I happened to congratulate someone on the scary-ness of their mask, only to be told that they weren’t wearing one! Whoops!!

A number of our healthy “crop” of Sweet Peas were present, with Geoff E and Mick W bringing theirs along for a run in the spooky gloom. These 5” gauge Peas were accompanied by not only Andy’s 7 ¼” gauge version, but also Kev’s 3 ½” gauge version “Violet”, an engine that was built by Life Member Eric S. This was the engine’s first run in many years, and ran suitably well to haul Kev and his Dad around the track without fuss. No doubt a bit of tinkering will have this engine in tip-top form.

Paul B brought along his Simplex which he has recently finished and has just started steaming.

Ken had brought along what could only be described as the spookiest thing on rails! Yes, we had a proper ghost train!

Road steam was well represented, with Terry’s 6” Garrett tractor, Chris H’s “Scallywag”, and Geoff B’s 3” Burrell “Albert”. Geoff really came prepared for his night time run, and with his lights shining, took the engine for a long drive around the site, past the timber yard, down past the standard gauge railway, up the roadway and back to inside our track. Fantastic!

It was great to see the family of our late Chairman Peter N arrive, complete with one of Peter’s engines, a 3 ½” “Lilla”. With some assistance the engine was steamed to allow the family to take it in turns driving it around the track. All systems worked fine and the whole family seemed really pleased to have driven it. A very poignant and emotive moment for all concerned.

Stationary steam was well represented, and while Boiler John had the big boilers in steam adjacent to the timber yard, Peter Ba has his recently-acquired miniature steam plant running near the picnic table. This is another engine that Eric had made, and some of those present on Saturday reminisced of the numerous times Eric used to steam it at Weeting. It runs beautifully and it was great to see it in steam again.

Chris had brought one of his r/c aircraft for a fly. It was suitably bedecked with numerous coloured lights, and looked quite the picture as it zoomed around the sky. We also saw a couple of lovely r/c boats on the pond, with at least one whose on-board lights shone up very well in the evening dark.

Fresh from it’s appearance at the Burrell Museum’s End Of Season Steam Up, Richard’s Burrell crane engine “Lord Derby” trundled down to the track to see us. This engine had covered some miles during the day having roaded from Weeting to Thetford and back again. Quite a task with a two-speed engine with no springs!

Fish and chips were organised by Mick W, and liquid refreshment was as usual in the capable hands of John. We thank both of these members for playing their parts to keep us fed and watered.

Engines were in steam and running until well after dark, and everyone present seemed to have a great time. There was a great atmosphere, especially with the evening air turning the engines’ exhausts into billowing clouds of steam.

We must mention our newest member, “Barry”, and his dog “Boneo”. We hope they enjoyed themselves. I’m also hoping that they managed to eat their fish and chip suppers, as by the looks of them they could both do with a good meal!

Many thanks to everyone that organised, supported and came along to make this club event a great success and a night to remember. I’m already looking forward to next year’s Halloween Run!