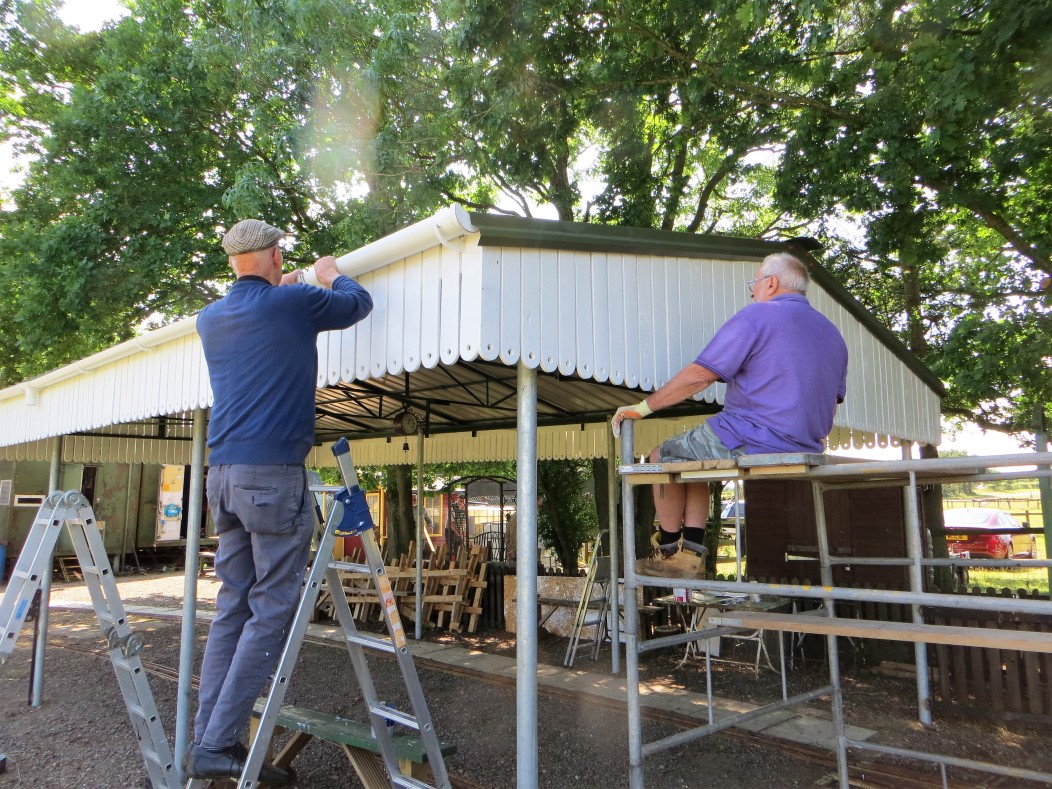 Hello everyone.
I am sorry to say that one of our long term members Mike Buddle passed away on Wednesday 11th August. Mike regularly cut the grass and chased the moles away at the track, and was a good friend of our President Mr Parrott. Our thoughts and condolences will be sent to his family; he will be sadly missed.

On a lighter note, the club is now open again, club meetings are being arranged and Saturday is now a play day, so please come and visit, have a play, or just sit and have a chat, tea and coffee on tap. Let’s hope we can now put the last eighteen months behind us and get back to normal. As usual there is plenty of content in the mardle, due to our editor Mick W who does a sterling job and keeps us enlightened. Well have a good read, come and visit, hope to see you all soon. Dave M Chairman.

Number 21 Mardle, who would have thought way back in December 2017. The work force has been exceptional during this very strange year of Covid 19, the crossing and the light system have all been completed, and we have already had a Traction engine trundle over the new crossing , very smooth, so a good job done, The new station has also been completed and Mr Parrott has cut the ribbon to officially open “Fengate Halt” Station, some 27 years 64 days since he cut the ribbon opening the new track at Weeting. He had a ride on Dave M super engine, after he alighted he said this was the first time he had been driven round our track behind a steam engine.
Looking forward to having a general meeting. I contacted “The Ram” and we can start meeting in a different room on 1st September 2021
It would seem the Midlands Engineering Exhibition and 2022 London Exhibition will not be held.
The running day on 24th was a great success we had a great BBQ, Raffle and had some real trains running, three traction engines , a boat, and hey we have been seeing a crocodile swimming in the pond, very life like. We had nearly 50 members so a really good turn out, look forward to the next one.
We have been invited to attend The BRANDON Festival on 21st August 2021 so this should be interesting, if you want to be part of it, please let me know ASAP. mw

Following the return to the track on March 29th 2021 we found that the wind had completely destroyed the station, lifting the very substantial posts it was built on out of the ground. For some time the members attending the track felt that when the crossing was finished it would be nice to build a new station. We had a committee meeting and it was put to the club, some objections but it was agreed that we could do it as long as we did not spend a lot of money, well we spent £320 for the roof material and all the ex-tra costs was donated by the work force.
We obtained 11 large 8ft x 4 ft pallets, FOC , we bought 6 second hand roof trusses which were donated, the post were donated, all the water ware , guttering and the like acquired and re used. So we set to with the 8 posts, dug with the post hole digger, some three foot deep, packed with hard core and couldn’t be moved. The pallets were dismantled and over 250 pieces sawn, drilled and a round bottom sawn using a band saw, they were then undercoated and then top coated so you can see we have been hard at it.
The roof panels were purchased, Geoff B and his very large trailer went to Chatteris near Cambridge to pick them up and with in a week the whole station had a roof, we had to make the roof top and we also made a trim to cover the end sides, you can see that it has all gone together nicely. We then added the guttering and piped it to a 1000 litre container and have had a filter built to collect the rubbish before the water is allowed in the tank, we hope this will help with the steam engines requirements of water. Of course you could not have a station with out a clock, this was also donated, a couple more additions are to be added and the station will be fully functional and was opened by Mr Parrott on the 24th July 2021.
Well done to all the members who helped build it and thank you to the members who donated to help it keep the cost down for the club. 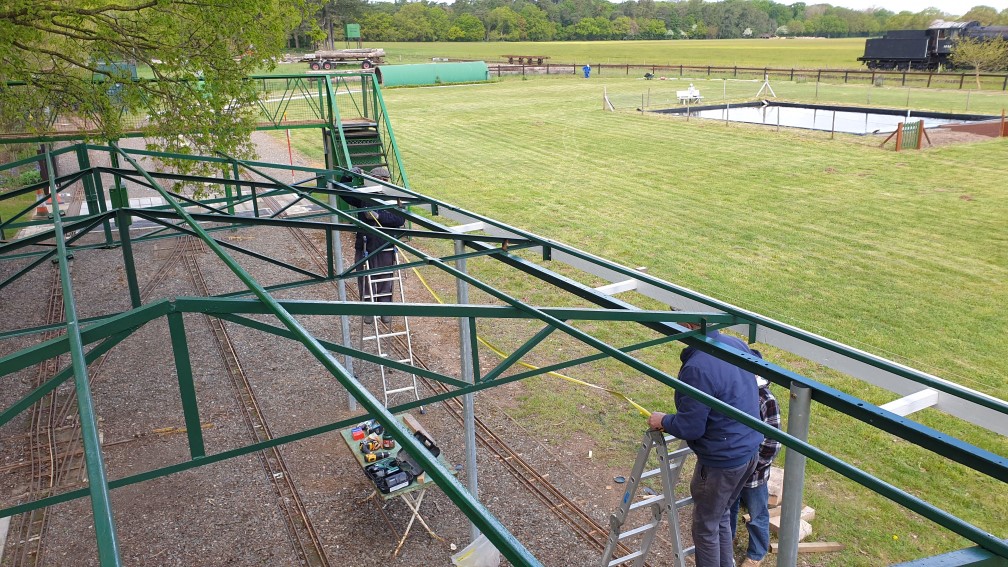 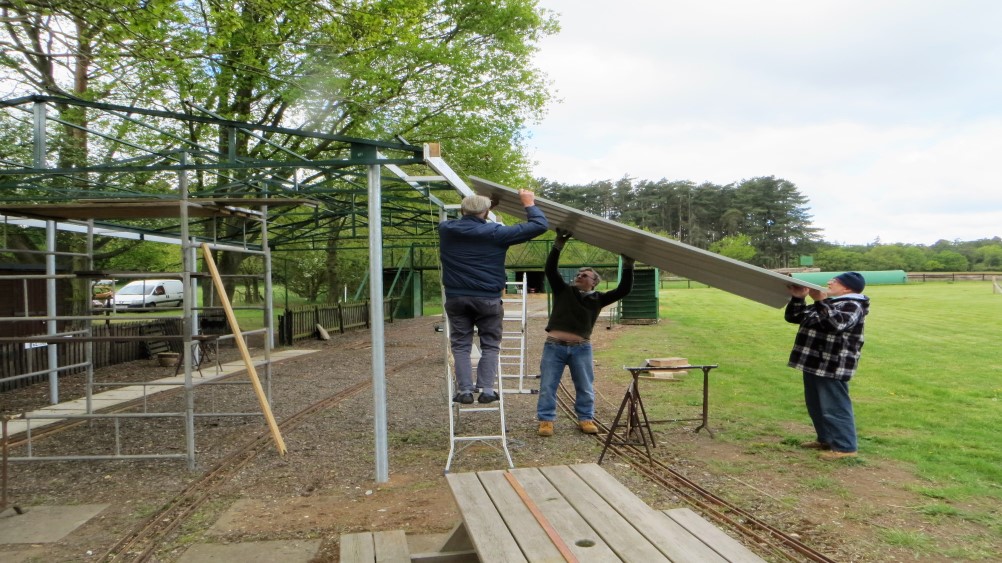 First roofing sheet being put on. 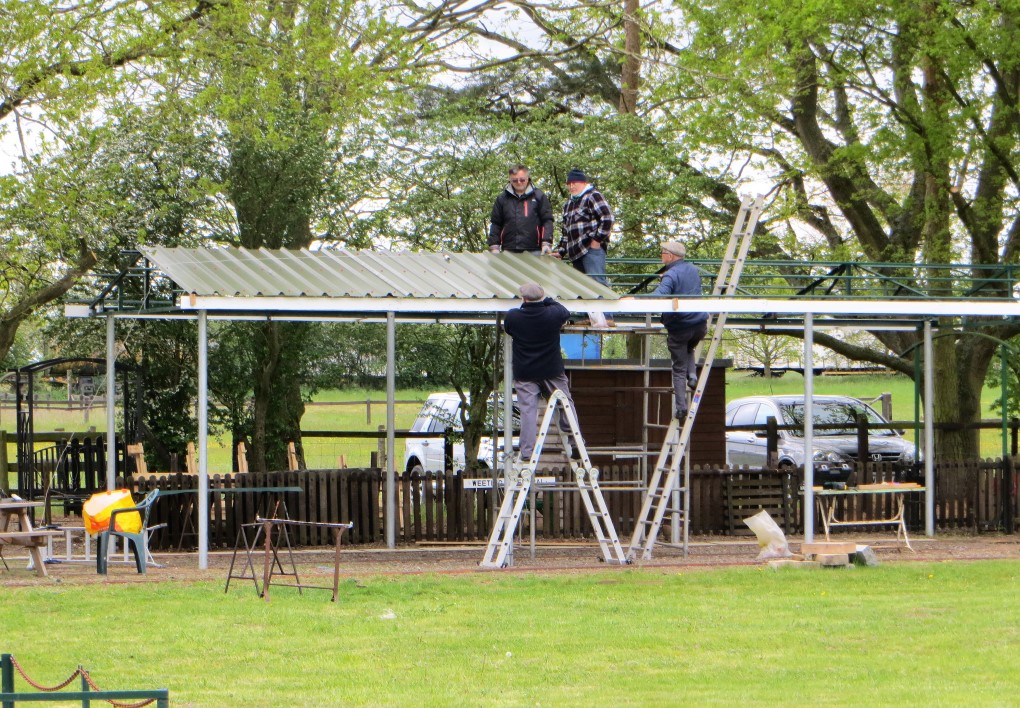 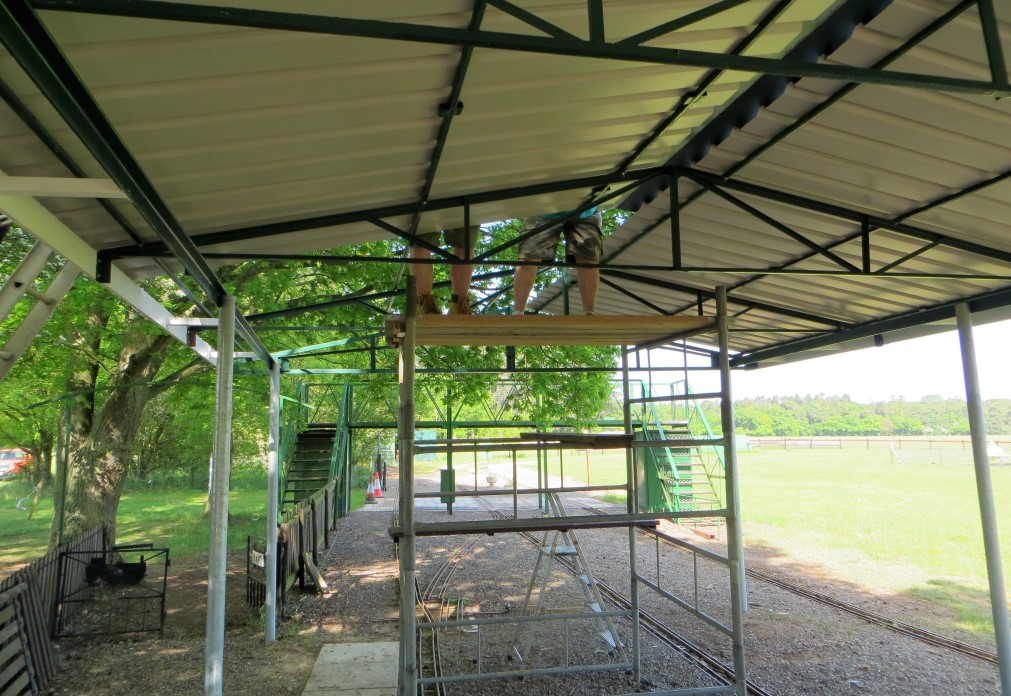 A couple more to complete the roof.

Free pallet wood, drilling and cutting and erecting, the finished Station was opened on July 24th 2021. We had a new supply of water and this was a real tri-umph , just the roof material was paid for the rest was donated by the work force, So thank you guys a good job done and dusted. mw

Going forward, I went to see the people in the Ram Hotel on Wednesday and asked them when we could perhaps continue to hold our monthly meetings at the pub. They have said yes, but not in the old room, but a room through the Restaurant, perhaps a bit smaller but will hold our meetings going forward
We have the workshop to convert to a proper workshop, we have had a grant from Brandon Town Coun-cil to do this so perhaps when the weather is not so kind we could have a blitz and have a place to be proud of . Perhaps in the future, as project to work on are diminishing, Instead of working perhaps we could have some lectures and practicable thing to do, we could have some of our very talented members being teachers for the day, time will tell.
But also , perhaps we only do one day a week and Saturdays, only wild thoughts, but some of the work force do come a very long way to help us.
We have the Brandon Festival on the 21st August 2021 to look forward too, probably will be like The Hockwold show.
The Midland Exhibition has been cancelled this year, and it seems London Alexander Palace for 2022 is also cancelled.
I imagine one way or another September will be our first general meeting, and then November’s AGM were things could all change.