Hello everybody. I hope everyone has managed to keep safe and well. The weather we have had in the last month has been great and hopefully raised the enthusiasm we had before this virus set in.

Well at the moment Weeting is still on to happen at the track. I hope you all returned your forms back to Mick (Sec) and our running days as listed are going ahead. The extra two sets of points have now been completed which will help to transfer engines up to the shed instead of having to go halfway round the track. There is some work at present going on at the entrance to the Loco shed, which should be com-pleted shortly. This is being done to help make the lines easier to move when retrieving stock from the Loco Shed, so let’s hope we get some more good weather, so that we can get out and play. I hope to see you all at the next meeting on Wednesday night. DM

First Mardle this year; well what has been going on? Well, first it has been very cold and sometimes very wet, but it has been winter, so is to be expected. Several jobs are being done: the kitchen is finished; the two sets of points are finished; the work shop has just been started. The field is starting to look good, although the moles are a problem. The year is back to normal, except getting to the field which is somewhat expensive, so the long distant worker members do two days and the locals mostly three. We have now had two general meetings this year and generally the year has been mapped out (please look at the diary on the last page to see the latest updates). So we have 6 running days: The Weeting Rally; Brandon Festival and The Hockwold show to attend. This looks a busy year, and we will obviously have to maintain the passenger trucks and keep health and safety under control, but it all looks manageable. The tractor needs some loving care and new parts which we can cope with. The bridge step planks which broke have been repaired. Probably, or next thing will be spraying the weeds to tell them who’s boss; all very manageable. Later in October we can organise a trip to the Midland Model Engineering show at Fosse Way, so if you are interested let me know. Later this month you should be able to speak to Dave about boiler testing. Please do not forget the Web site, all the pictures which are taken and not in Dropbox are now on the web site.

Sad times at the club

2022 has started and a sad time for the club. We have had two people in the club who have passed away.
First on the 11 January 2022 Len Cook “Leonard William Cook” Len to his friends passed and at 96 years was cremated at Abbey Chapel, West Suffolk Crematorium on Tuesday 1st February 2022.
At the wake held at the Bell Hotel King Street, Thetford his daughter Sharon remembers seeing at the track The Yellow Electric engine and said she remembered always being
happy to come down with Dad (Len) when he was going to the track. Len an active mem-ber and Secretary during his time, was one of the members who started the club going.
Elizabeth Ann Harding aka “Beth”, wife of Mike Harding, has also passed away on the 13th February 2022. Her funeral was 28th February 2022 at West Suffolk Crematorium. Beth will be remembered in her yellow vis jacket on the station keeping the children in order on as many as twenty Weeting Rally’s. Beth will sorely be missed by everyone.

The weather of late has been cold; too cold for the gas heaters to work, but the wind recently caused the signal box to be blown over and damage the fence; it has been righted and the fence strengthened. But we will have to put some metal bars in the ground to make the signal box safe .

Lighting at the Loco shed end

We have moved the solar light panel so we can have lights in the 4 buildings now at the Loco shed end. Where it was, there was never much sun, so it has now been moved. There is a picture in the Mardle where I can fit it in. Well done again.

Following much discussion, it has been decided to add two new sets of points in the track between the Bridge and the Tunnel. This is to help two things; sometimes during Weeting Rally we can get a hold up in the station and if we have three trains going, the last train sometimes has to stop, but cannot get into the station. This causes a problem when the train stops; the passengers think “Oh dear, I suppose I better get off” – wrong! The guard has to stop them alighting because they will be walking all over the track. But with these two new sets of points, it will enable the train to be changed from the middle track to the in-side track, and continue round so that by the time they get back, the backlog may have eased. It will also make it easier to get an engine from the turn-table up and into the Locomotive shed without having to go round the track twice to get into the loco shed, especially if the loco is NOT in steam.
Geoff E has taken this on and has cut all the pieces of metal required, all from items under the workshop; he has been ably assisted by Mike L and Ken W, and sometimes Steve HW. Well done guys! It is now all complete and you can come and run your engines to your hearts content. There are many pictures, so here are a few to show you how the work went on. 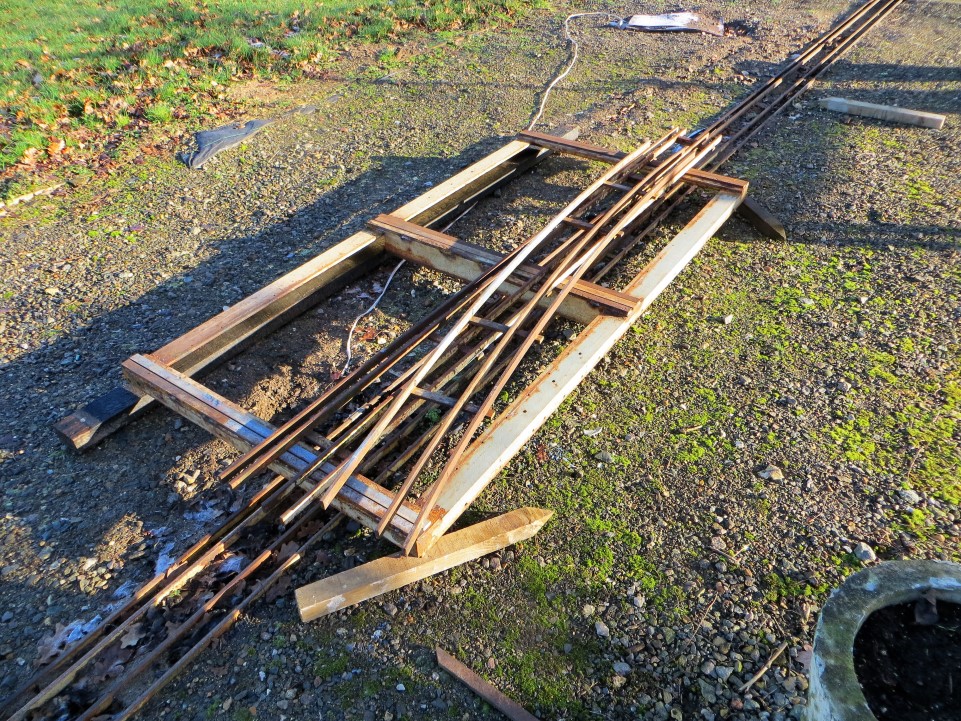 This is where it is going. 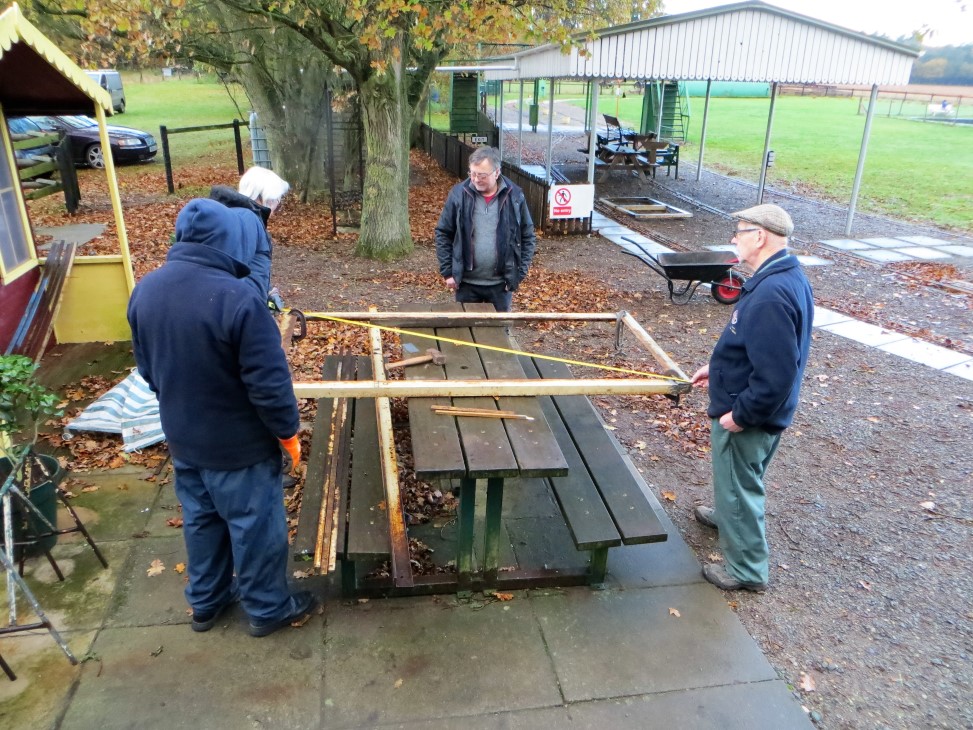 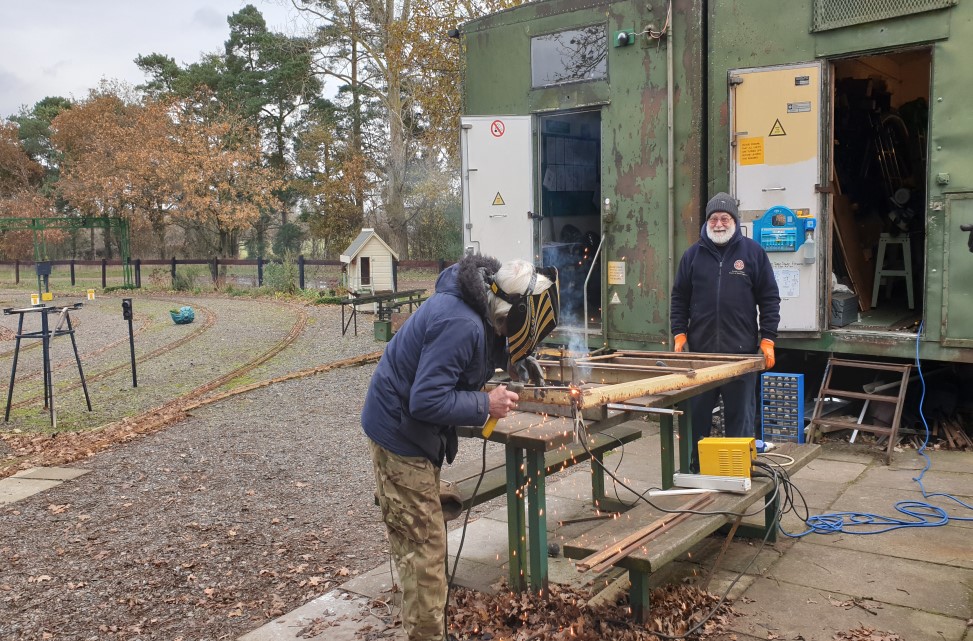 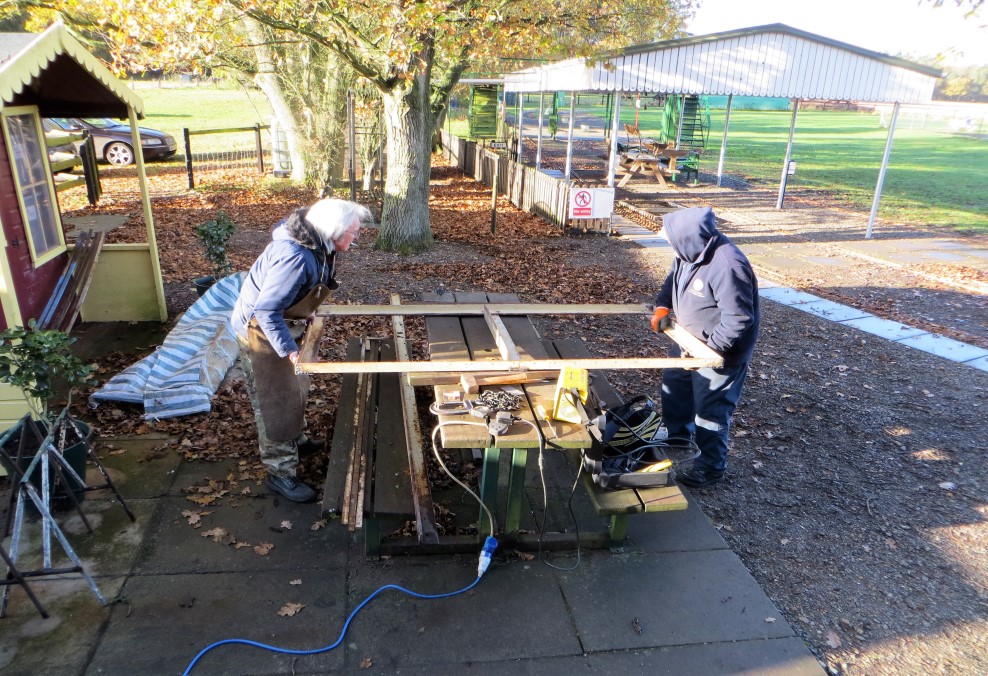 Ready for the rails. 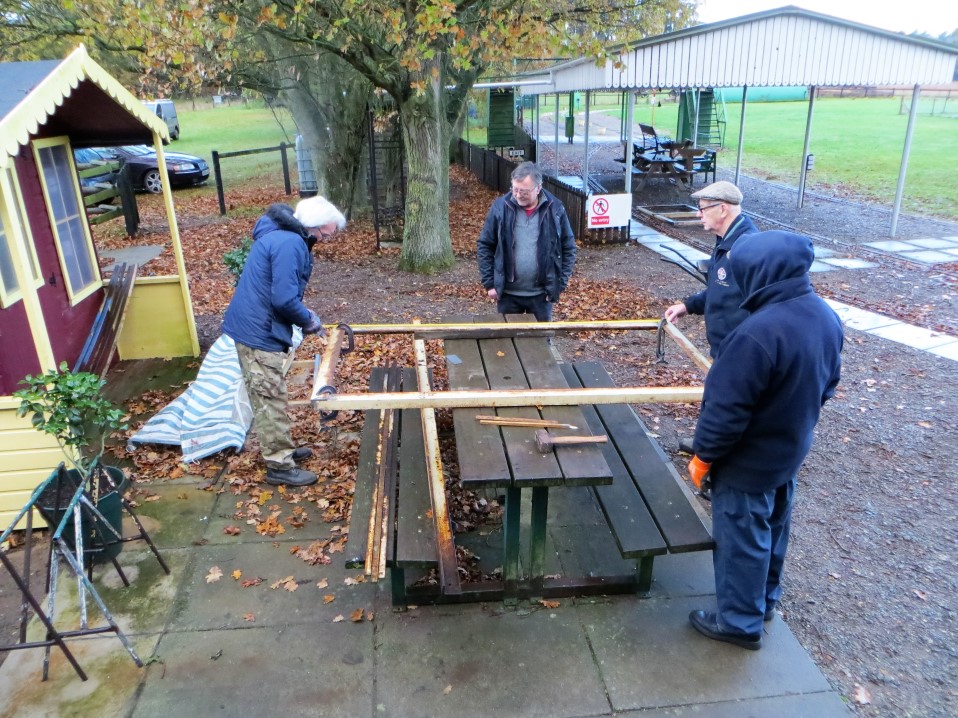 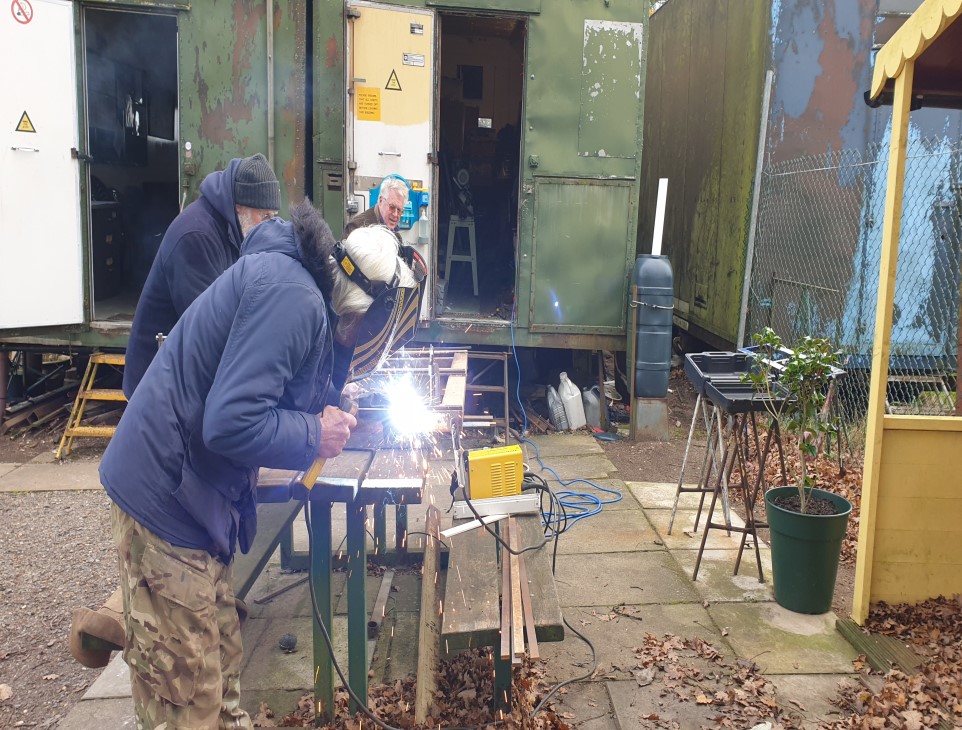 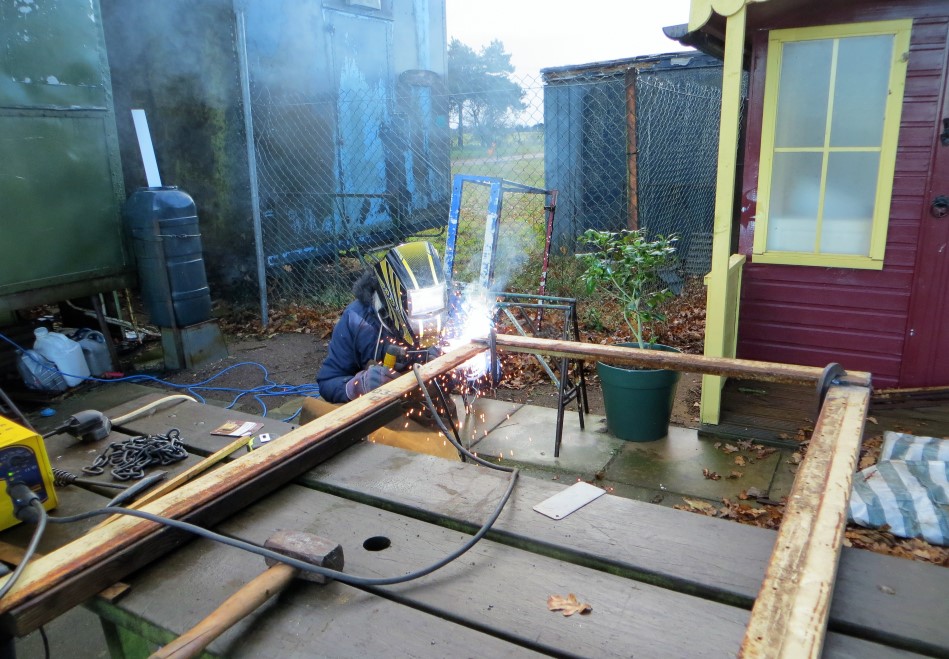 The generator is busy today! 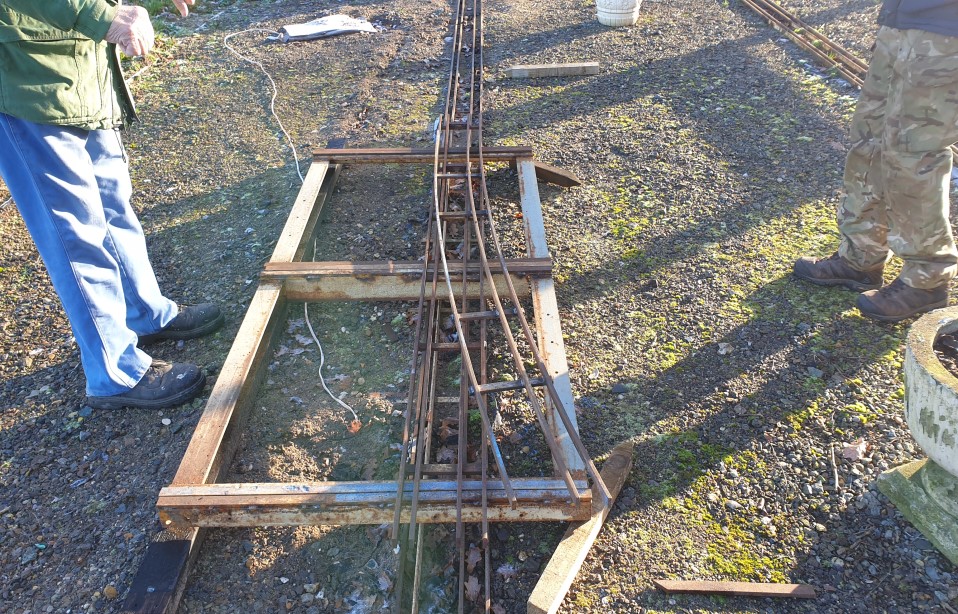 This will line up great!

All showing what needs to be done with the two new sets of points.

It has all been completed; a very professional job! Well, we would expect nothing else. So, come and run you engine and give it a go. Well done guys!

Latest Photos of the new sets of Points

The tea room is complete! It is done and finished. During the Christmas break, Norman H and Ralph R, dismantled the kitchen we had been offered by The Littleport Bowls Club, and in the same day every thing had been dismantled and delivered to the track the same afternoon. As I write this piece, all the cabinets and cupboards are installed and the tiling is being done. We have tiles under the work surface and even tiles on the floor. There are many pictures, so have a good look at what I want to say is “This is all due to Norman H who secured the kitchen for free. So it is a big thanks to you to Norman; he and Ralph have done all the work and I have to say “Seeing is believing”. We will have a kitchen where we can put away everything and it can be kept clean and tidy; a Tea room to be proud of. Again well done guys

You can see that Norman and Ralph have done a fine job. We have also got approval from Mr Parrott to add water to the sink if we can find where the water is. We have tried with a water divining implement to find where the water is; when the weather is finer we will see if it is possible. I hope you will all be impressed.
Well done Norman and Ralph! “A suuppeerr Job”.

We were very fortunate to be awarded a grant from the Brandon Council to upgrade the workshop. The workshop tends to be (a dumping ground, where everything not wanted at home gets left at the track) So we have started to sort out everything in the workshop. We have some nice tools, but it is very difficult to use any of them because of all the rubbish piled on top of them, so the rubbish is going to go.
We also want to make the generator more accessible; nobody can remember when the last time it had an oil change and reading the instruction manual it suggests this is done every 25 working hours. So we propose making a secure separate space at the end of workshop, where we can get at it without having to be a contortionist.
Our aim is to make it a proper workshop so if the lathe is needed to do anything you switch it on and make the piece. At present this is NOT possible, so watch this space.
We will also make the existing ring main larger so that we can plug in the machines and use them if anyone of them should be needed. It is not a 5 minute job, but certainly something which has been required for ages.
So please, we are happy to accept items which Paul B can recycle and get money on, but if it is something you don’t want, then please take it to the tip, because this is what we are having to do. This is work in progress.

Some photos from the last few days. The frame for the workshop wall to house the Generator in. Photo on the right is the inside track new Points.

These two pictures are the new Brandon & District Society of Model Engineers new “Challenge Trophy” called the MSW Challenge Trophy. It is to be awarded each year to the member who accumulates the most points during the year for things they have done. More details when we get a set of rules out in more detail. It does have a square cover to keep it clean. 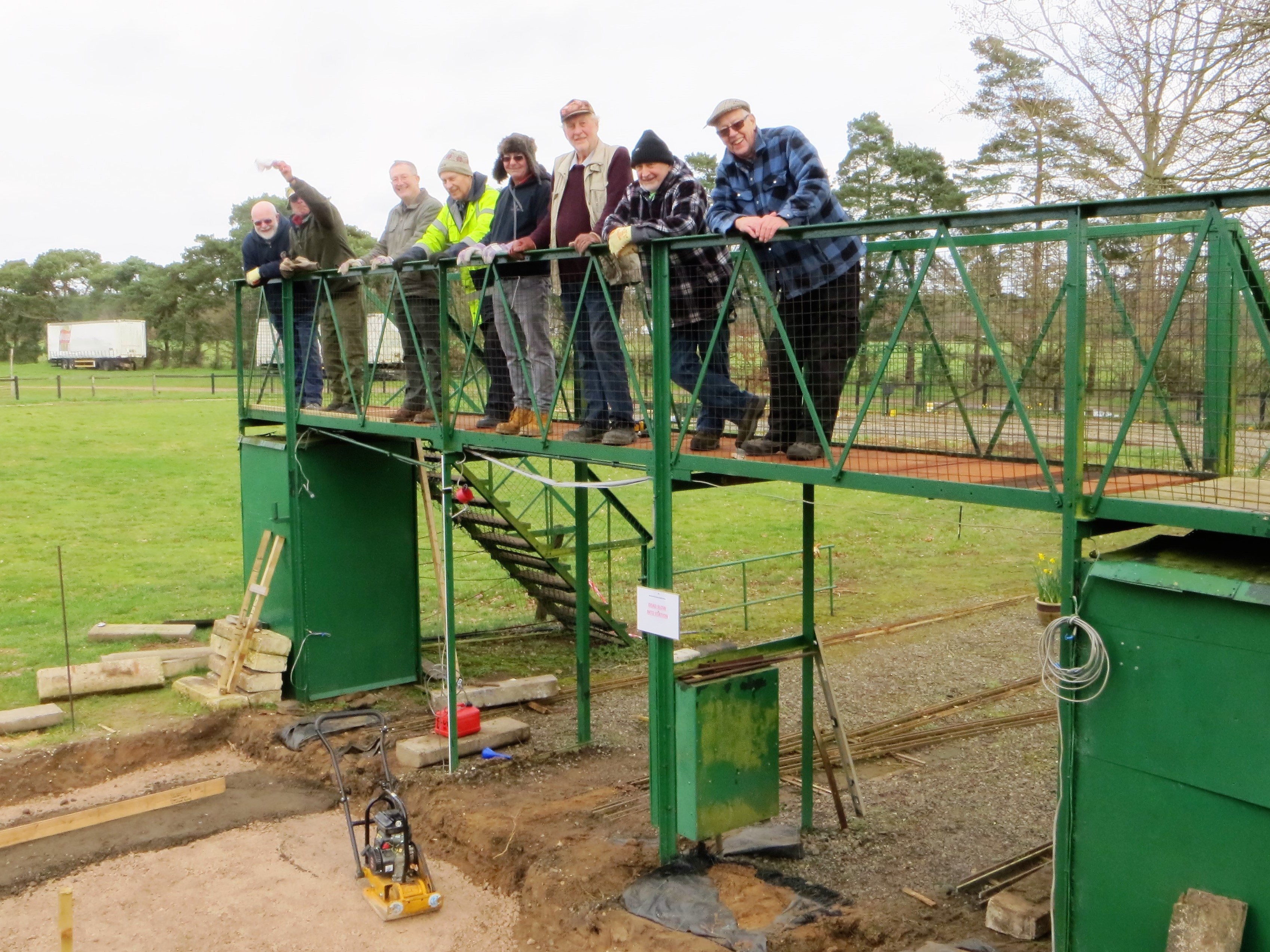