As a member of the East Anglian Traction Engine Society, I was approached to make something for an auction that was to be held at the annual EATES Dinner and Dance in October last year. Try as I might I could not think of anything I could make! However, whilst out and about at a steam-up in Lincolnshire, I had a flash of inspiration; an engine-flavoured moneybox!It was something I’d always promised to make for myself but never got around to it. Now I was finally going to make one….and then give it away….typical!

Photos were duly sourced for inspiration and Burrell 1563 “Jimbo” was selected to copy. After having a chat with a chap who produces many patterns for the engine world and beyond, I duly secured the generous donation of a small brass smokebox door ring suitable for a Burrell. The ring was about 3”/75mm diameter so this set the size of the moneybox I was to make.

A quick search soon found suitable components for this creation; a lump of thick steel tube about 4 ½” dia. , a couple of steel discs for the door and the back, a lump of tube about 2” dia. for the chimney, and various other bits and pieces. My usual method of making anything was followed, using two of the finest tools ever invented; an angle grinder and a welder! You can make anything you like with those gadgets!

I’ll admit that I wimped-out of spinning a copper chimney cap, so instead I made a version of Burrell’s cast chimney. This was achieved by forging the distinctive flare on the top and welding that to a piece of tube that I had cut a wedge out of and brought together with a hammer, thus forming the tapered chimney. All welds were ground and dressed thus making the welds invisible.

The door was pressed using a combination of a dishing tool and a vice. This achieved the subtle dish in the centre and the flat to the outside rim. A basic hinge was made using totsy bits of 6mm tube welded to the door and smokebox, with a bit of welding rod for the hinge pin. The brass door ring was attached using three tiny pieces of M4 studding and some nuts. 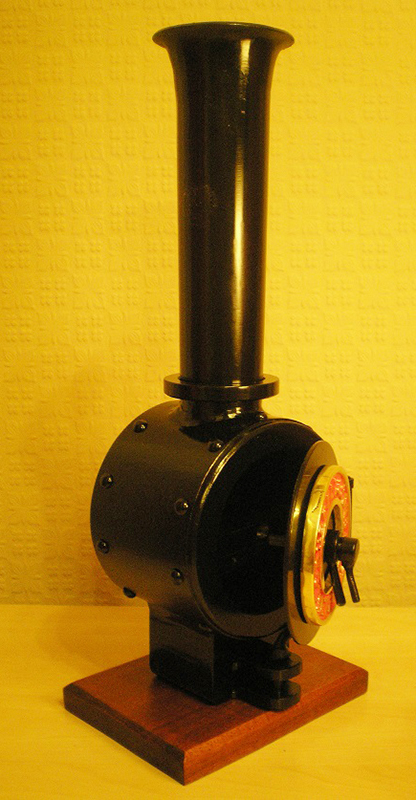 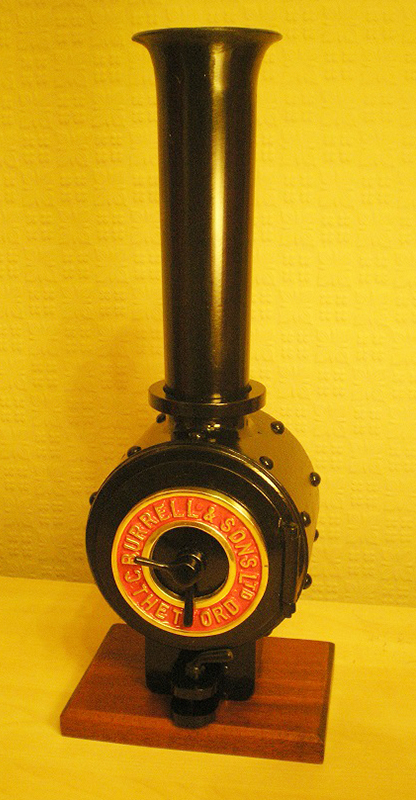 The thick tube for the ‘box was machined at the very front to imitate the radius of the flanged front ring and wrapper of the full-size article. The actual front ring was made using a ring of rod welded in and machined flat. The hole for the chimney to poke through was cut using a plasma cutter (Oh yes! Serious technology here!).

The dart hands (“clock” hands!) on the front were fashioned including an M6 bolt that engaged in a tapped hole in a horizontal bar welded behind the “flanged” front ring. This kept things simple!

A perch bracket was made from flat plate, and a tow bracket and pin were also made. An M8 tapped hole in the bottom allowed the whole thing to be fixed to a wooden base so that the moneybox stood on a stable foundation.

Holes were drilled and a handful of rivets were fixed in. Then the chimney was welded to the top of the ‘box and dressed-in. In total it stood about 15” high, and I felt it was a decent representation of the chosen muse.

The whole thing was primed and painted and duly taken to the Dinner Dance (a splendid event by the way!) where it enjoyed a great reception by those present. I won’t say how much money it raised; suffice to say that it was about three-times that of what I expected; tremendous!

So, if you fancy a little project for yourself or for a gift for a lucky recipient, give it a go. I still need to make one for myself……….