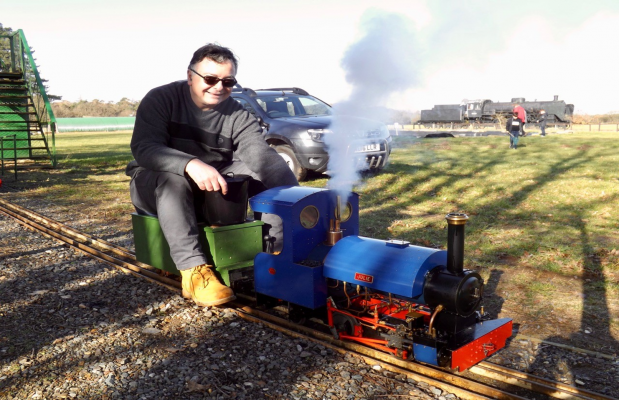 Hello Everyone. Well here we are again, near to the end of April, soon to be May. Well, what has been happening, the sun has started to shine, there is a lull in the rain, so lets hope summer will soon be here. The work on the track has nearly finished, the new signal contacts are about to be fitted, the water tank has been repaired, the grass has had its first cut, and the weeds are about to receive a good dose of weed killer, so all in all the track is looking very good.

We now have six new members and three junior members, so the club is growing.

Paul B Andy G and myself have just attended a Boiler seminar, we now have the latest updates, so we should be able to keep things  to where they should be. The Doncaster Model Engineering show is 11th 12th 13th May, so if you want a good day out go and have a look. My own engine has started to take shape, so things are looking up.

Lets all look forward to the rest of the season and enjoy it.

April has nearly gone, The ballasting of the track is nearly finished all the block work is done but we need to just finish both tracks from the end of the blocks to about level with the ladies toilets. We have worked in all weathers since November when the blocks arrived, we have some new contacts to do and a small amount of  re- wiring for the signals, some painting  and track tidying, so see you Tuesdays Thursdays or Saturdays.

We have already had our first sub committee on the 40th Anniversary, see report in these pages, we hope to have a theme for The Weeting Rally, more on that as it become more concrete .

There is the Doncaster Model Exhibition to look forward to.

There is I hope some exciting news on the Loco front, they seem to be breeding like “rabbits” watch this space.

The Hockwold Country Fair, is now closed and we look forward to this show.

Our NEXT meeting  May 2nd is our AUCTION Night so please bring your unwanted unloved items and see if someone else will cherish them, and in to mean time it will add a few pounds to club funds.

This year is full of Anniversaries.

Not only is the Club celebrating its Ruby Anniversary, but this day also marked two years since the extensive track work scheme began. To mark this date a running day was held at the track, together with  a terrific buffet of glorious cakes!

We were truly blessed with excellent weather, with clear blue skies coupled with “not as cold as expected temperatures”. It was nice to see so many members come along to enjoy this day.

Members turned out with various engines and toys to play with. Chris H came along with various r/c machines for air and sea. His “Flying Pizza tray” was zooming around the skies , and his model boat was making waves on the pond.

Two  5” Sweet Peas were in steam and looking very fine indeed. Ken W used his to pull a freight train combination of Geoff E’s bogie wagon and Kev’s work –in progress wagons. It was nice to see trains going round the track, and nice to hear the distinct sounds the wheels made on the track joints. Geoff E had his new-look Sweet pea “ Sherpa” in steam, looking resplendent in its new livery and Darjeeling Railway type adornments.

Ralph R had his big petrol loco complete with bodywork on the track. An interesting sit-in loco, we are sure that it has enough grunt to pull a house down! Great!

Sam H was making several laps of the track with his 5” electric loco and enjoying every minute of it.

Stuart F had a 5” electric and freight train which looked great in the bright winter sunshine.

Peter and Dave T had come along to road test a 7 1/4” Bullied Pacific they were fettling. A  stunning loco and a delight to examine. You get the feeling that given a railway of about a mile long and a good heavy train you could have hours of fun with this machine. An absolute delight!

Ray R  had brought along one of his stationary i/c engines which ran very well and caused a lot of interest.

We also had a couple of our older members present, nice to talk to Roy B and Rod C. BUT, surely the stars of today’s show were the three cakes that were brought out for all to enjoy. The work of some members and their wives and partners, they were absolutely splendid and were complete with candles, a railway loco and a miniature wheelbarrow in honour of the role these tools played in the tremendous work that has been put in to improve the track and make it look so good. They were all delicious and despite the large quantity presented, there was very very little left at the end, a testament to their tastiness!!! Many thanks to the chefs, their apprentices, and all those who came along to make the day so much fun.

I can now report that we have finished laying the blocks around the top two curves, from the Finnish Engine round to the Loco shed. We have finished the blocks, except the tunnel needs a few to smarten it up, but we now need to just complete both tracks with a few more boards to make it really finished, We have laid some 1000 block since they arrived in November, we have had all sorts of weather but we have continued on, it looks great, but I am somewhat bias.    We  are looking next to build a small shallow pit under the 7 1/4”  unloading area,  and we are also waiting for the right weather to spray the track with weed killer and the grass has been sown on the soil area’s.

We have also changed the RED light at the station water tank with an AMBER light and are getting the cables laid for the new contacts which will space out the Loco’s. Five have already been laid, so we are coming on a pace.

We have planted  most of the plants donated by Ralph R and Steve HW and I think these will enhance the track. We aim to paint the ladies Toilet and give the Men’s a blitz and make it more usable. We have more cables to plant/ lay and we will give the track a thorough clean, blow away all the winter leaves, add some more exit signs on the station. The station platform is to be renamed platform 7 1/4 , so it should be honky dory for the first run of the year May 19th, please ink this in the diary, NOW.  See you all on the 19th May. “ A couple more pictures”

Well, at the last sub committee meeting it was discussed and suggested that the Anniversary (RA) will be held over three days,. Friday 31st August, Saturday 1st September and Sunday 2nd run and clear up.

All these discussions and suggestions are the way the subcommittee is going forward.

Friday 31st, we will erect the three Marquees in the morning then prepare for a road run of traction engines to the Saxon pub, members can walk across the field or follow by car. We meet up at the Saxon for a drink and perhaps a fish and chip supper.

Saturday . Steam up and play all day, tea and cakes at 1300, games to be arranged for both traction engines and Loco’s . Saturday evening 1900hrs a buffet main meal consisting of cold meats quiches, pork pies and numerous salads . Sweet no yet decided. Beer, Wine, Soft drinks. This will be a ticketed meal and a charge will be made in advance .

Music and dancing. The will also be a raffle on Saturday.

Sunday perhaps another run, but then clear up and every thing put  away, ship shape.

Thank you for your return papers for he Hockwold Country fair, we have 11 members who want to participate with various Locos, traction engines , planes, boats , so thank you

The Show is on SUNDAY 3rd June 2018 and we do need a crew to set up the Marquee on the Saturday, more on that later

It’s a good show and not  to far to go so come and have a nice day out. Hope to see you there.