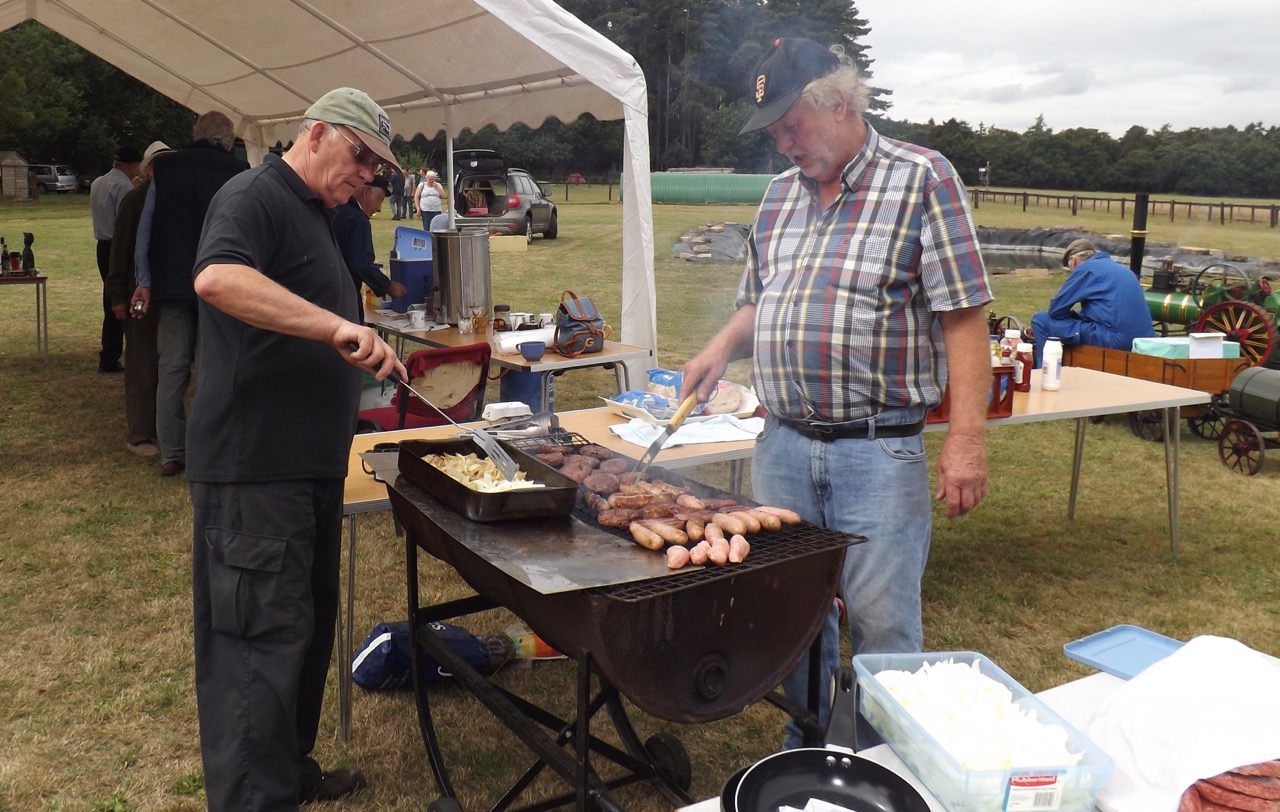 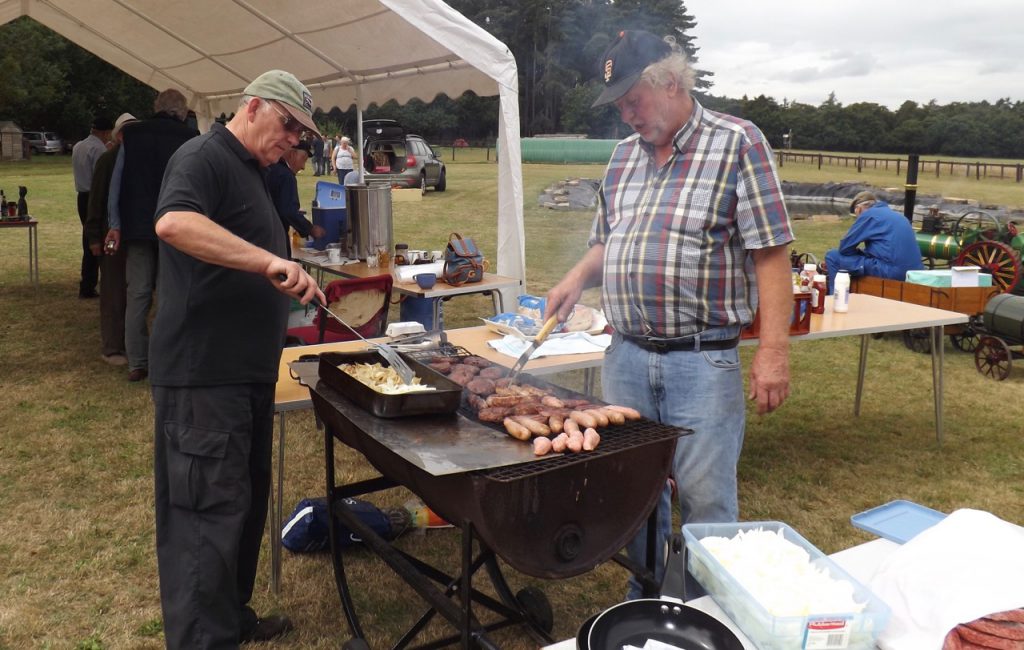 The small tent was erected within the railway field and used throughout the day as the base for the refreshments area, and to provide cover for any rain showers. The refreshments were superbly laid-out, with a large selection of drinks available allowing people to help themselves during the day. Our traditional lunchtime barbecue was ably driven by Stuart and a selection of willing helpers. Once again this was a welcome addition to the day and we thank them for putting the time into making sure everyone was fed and watered. Our afternoon refreshment of cakes and biscuits was also well provisioned and our thanks go to those who provided these splendid goodies.

Andy and Finn were seen steaming Andy’s 4 ½” Burrell agricultural around the site. A recent task of Andy’s is to get the Pickering governors working. This is not an easy job as there are many elements to contend with; the gland needs to be just loose enough but must not leak, the springs on which the weights are fixed must be not too light or too strong, and the spring on the adjuster needs to be strong enough to bring the valve down when the speed drops. He has got it working, with only the tiniest amount of adjustment required to get it governing. We look forward to perhaps seeing this perform on a sawbench or bailer.

Norman’s 4” Foster agricultural was in steam and chugging about. Having been lucky enough to have a go, this really is a lovely engine to drive; docile, responsive, and powerful.

Geoff B had brought along his recently painted 3” scale Burrell agricultural. Finished in Burrell green with lake wheels, and together with the fine lining it looks fantastic. There is lots of clean brightwork on this engine including polished motion, levers and other parts, as well as polished eccentric straps. Consequently, with this “show finish”, I believe this engine would have been fit for displaying on Burrell’s sales stand at the local agricultural show! Geoff has also made a 3” scale traction wagon from which to drive his engine. This is a very nice addition to a very nice engine. A well-made and detailed 3” water cart makes up this very attractive set. A beautiful collection. The engine runs well, too!

Mick had his 5” gauge 08 shunter on the track, with at least one of the youngsters having a go at driving it.

Having not been able to bring it to the May invite day, Kev had brought his 5” gauge Beyer-Garratt “Shere Khan” out for a play. It is a bit time consuming to have to assemble the bits and pieces of this engine on the steaming bay, but it ensures that you can get an engine nearly 6’ long into a small car, albeit in bits! This time spent is well worth it, and the engine ran well throughout the day, with Myles having a spell at the regulator for a good deal of the afternoon.

Chris H had left his traction engine at home, instead bringing one of his aeroplanes for a fly.

Other radio controlled items included a couple of fine model boats that were seen sailing on the pond.

One of our newest members had brought a beautiful clock he had made. I sadly never got a chance to look at this but those who did see it said it was very impressive!

It is an understatement to say that Myles’ dad is something of an engineer, and he had on display a couple of compressed air engines he had built. Methods such as wire eroding and CNC were used and the results are very smart indeed.

“Boiler” John had the large stationary steam engines in steam which always makes for a very impressive sight, and allows for the rare opportunity to get up close and personal with them.

Resident standard gauge loco Andrew Barclay 0-4-0 “Little Barford” was in steam and chugging up and down its track. Thanks to those who were up early on a Saturday morning to get it in steam!

The raffle was drawn mid-afternoon, and we are grateful for the many prizes donated.

Once again we must thank the catering department for their great efforts in keeping appetites satisfied, and to all those who helped to make it a very enjoyable day.

Written by Kev B