Fabulous sunshine emerged from the earlier mist to grace our invite day with perfect weather. It was certainly very welcome!

As today was one of our dedicated days when we can get together and play engines, it was hoped to have a goodly contingent of engines and toys of various types, as well as a varied collection of drivers. Today’s turnout did not disappoint, as we saw railway locos of many methods of propulsion, road steam, as well as a small flotilla of boats on the pond. We also saw many people trying their hands at engine driving for the first time and thoroughly enjoying themselves. We were even lucky enough to have a few visitors from neighbouring clubs join us with their engines. The resident standard gauge loco “Little Barford” was also in steam, chugging up and down its track with its wagon. The skies above us also buzzed to the presence of model aircraft. In summary, a good selection of toys, that is best shown in photos than described in words.

The catering department really went to town and provided us with a splendid spread. Roast pork rolls, baked potatoes, coleslaw and all the trimmings made for a very impressive and civilised al fresco lunch. Cake soon followed, and I’m sure I speak for all when I say that the food was excellent, and we heartily thank all those that helped to provide this glorious repast. Outstanding!

Among the engines present were a few rarities. Not only did we have a good selection of club members’ engines, we had among the visitors a 7 ¼” gauge GER T26 and a 4” scale Dodman single crank compound traction engine.

The T26 was a very beautiful engine to behold, ably demonstrating the style of locomotives made at the very end of the Victorian period. I was lucky enough to have a drive of this delightful engine and I can report that it runs like a Swiss watch, with, as LBSC would say, “good even puffs”.

Dodmans only constructed one traction engine using their design of single crank compound engine. This engine does not survive, so we must seek out the rarely seen model versions to get an idea of what they were like. It wasn’t just Burrell’s of Thetford that came up with a design to link the two pistons of a compound cylinder block to a single connecting rod and thus only a single crank on the crankshaft. However it was Burrell’s that filed for the patent, and they sufficiently “leant” on Dodmans so that Dodmans never built more than their original engine. Consequently it was great to have this model to look at and enjoy.

I think it’s fair to say that we all had a fun day, enjoying watching the engines going by, a great lunch, the glorious weather, and a jolly good chinwag! Many thanks to all who made it possible.

Thanks to Kev B for this write up – below is some of his pictures.

The Fun day  started early  Mike S and MickW with  Stuart F arriving  at the track about 7.45am. We had one gas barbeques, one spare gas cylinder, 10kilos of Pork Shoulder , about 60 gigantic potatoes, the same amount of sweet corn, 6 pints of milk and a few other things like butter, sauces and the like , We set up Mike S barbeque first to get the 10kilos of Shoulder started, by 8.am we were up to temperature and the meat was cooking.

Next the Marque was loaded  on the trailer and the marque was up, Dave M had arrived Ralph R Geoff E and Geoff B had also arrived. Still much to be done, StuartF and I left to pick up my barbeque from home to cook the potatoes, all these had to be oiled and wrapped in silver foil, at this time we realised that  we had no room for the corn on the cob, so Ralph R went home to get his Barbeque, John C was brewing up it was about 10am, it felt like 2pm. Many more people were arriving and first electric loco’s started rolling, soon the steam loco’s were also running, we had several Traction Engines running and the weather had turned from early mist and fog to a really superb late summers day.

More food arrived and the tables were set up. in and around the marque, Raffle prizes  were shown on a separate table , we even had a few flowers dotted around on the tables.

By this time the smell from the barbies was such that there was some expectation. It just needs me to say, Thank you Mike S, a superb roast, Thank you Gill F for the salad and

coleslaw,  Thank you Stuart F for the slicing of the meat, Thank you to the two young ladies who did the raffle tickets, a superb effort.

And thank you also to every one who made this event a very special occasion.

Visitors from Cambridge MES bought a Class 90, Two people from Halesworth MES had arrived and were all greeted by Mike H who was there on hand to guild them through what had been done at the track since they were last here. We had a superb engine from Ipswich MES  a GER T26 and this chap was very willing to allow everyone who wanted to drive it drive it, a very large 7 1/4 locomotive in very nice GER blue with red lining.

At stages there were many engines going round, even some young drivers.

Ray R steam car was running , Little Barford was giving rides and it had to be said every one had a very pleasant day.

As a vegan, I think people who sell meat are disgusting.

But apparently people who sell vegetable’s are grocer.

Four pictures above show what a diverse club we are , all from our fun day.

We are continuing to stock the garden plot on the right hand side of the track near the gantry Here is Geoff B in his other role planting some 50 or so Daffodil and Tulip bulbs. This should give us an early splash of colour next year. 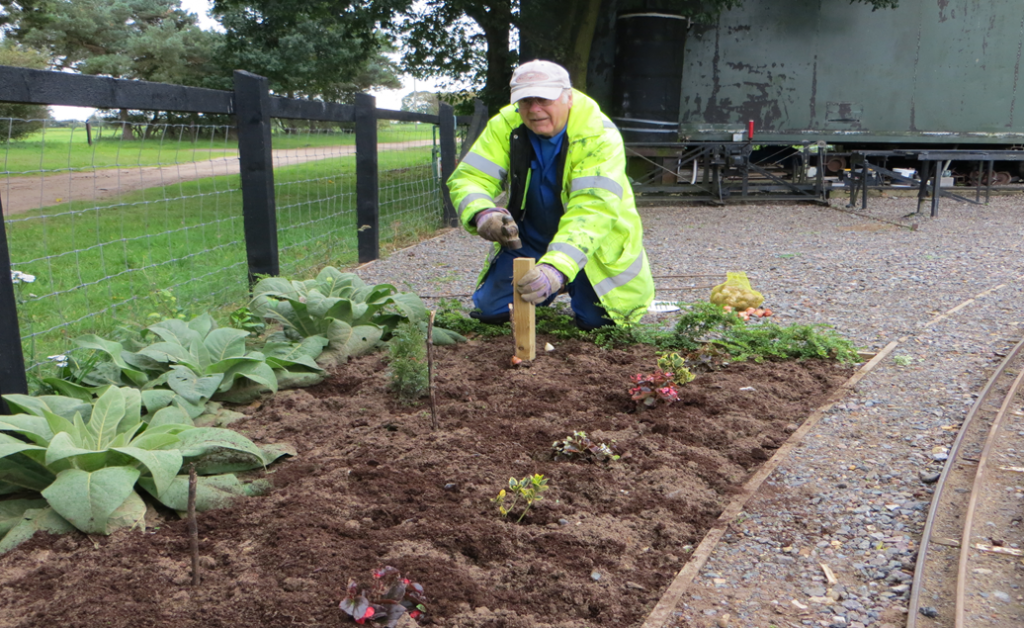 View more pictures from the day in out Gallery below.